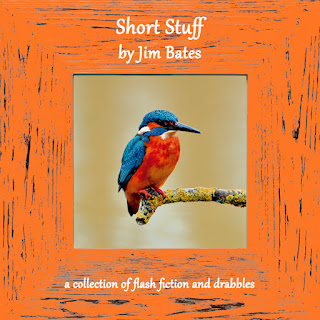 Okay, so this was published by Chapeltown but I was only involved in the design of the book. Other people decided whether it was worth publishing. Another editor and proof reader worked on the text.

Jim certainly gets a lot of story into a small space. He retains his distinctive story-teller voice for this.

There is a lot to make you think in this collection.

This is one of the little square books of flash fiction and Jim’s work is a very welcome addition to the series.

Get your copy here.

Odile obtains a post as librarian at the American Library in Paris. She continues working there for most of World War II. She makes many friends, some of whom later are in danger: Professor Cohen, who is sent to an internment camp, Margaret, an English woman who is the wife of a diplomat, Bitsi who works in the children’s section and many others.

She has a twin brother, Remy, who dies whilst he is a prisoner of war.

She finds out that her father and the man she married, both of whom are policeman, have been responding to “crow” letters – letters that giveaway illegal activities. Odile hides some of these letters. She leaves her husband of one day when she finds out this that he has been involved in beating up Margaret who had had an affair with a German soldier.

We read of Odile in World War II but also of her life in the 1980s as a widow in America. She married bigamously an American soldier she met at the American hospital. She befriends   a young neighbour, Lily, and tries to help her avoid the same sort of mistakes she had made.

Some of the characters are based on real people.

Grab your copy here.
Posted by Gill James at 01:16 No comments:

About a Boy by Nick Hornby

This well-written classic has of course been made into an engaging film as well.

Intriguingly Will screams out to be played by Hugh Grant and of course he was.

We have two equally significant main characters in this story, Will and Marcus.  The story shifts between the two of them.  Both have convincing voices and both are rounded, authentic characters. This is not a “happy ever after story” and one of the novel’s many strengths is that it shows us life as it is.

Both characters are unusual.  Will doesn’t work – he lives off the royalties from his father’s Christmas song. Marcus lives with his mum, a single parent who has mental health problems. He is an awkward child and gets bullied. Will ends up being as a bit of a reluctant hero.

Email ThisBlogThis!Share to TwitterShare to FacebookShare to Pinterest
Labels: About a Boy, contemporary, Nick Hornby

Meet Me at the Museum, by Ann Youngsen

This is a story of a mature couple finding love through a series of letters on which they get to know each other intimately. It starts off with a simple query addressed to a professor who has died.  A colleague replies on his behalf.  The story of their lives comes to us through the letters. We begin to empathise with the characters. They both have much sadness in their lives and we watch as they sustain each other through the writing of the letters.

Meet Me at the Museum was nominated for the Costa First Novel Award in 2018.

The End of Everything by Katie Mack

This month I’m recommending Katie Mack’s The End of Everything .

I actually bought this book, with another one, for my husband’s birthday.  It’s an academic book, so not all that cheap but a quick look at Amazon today shows that you can buy it at a reasonable price. He suggested I should read it.  I was a little hesitant at first because it is    book about science. I love science but I don’t always understand it. I needn’t have worried. This book is very readable.

Here we have an overview of how the world might end.  We’re used to the Big Bang.  Now we’re looking at the other end.  Don’t worry, though, it’s billions of years off yet.

Katie Mack covers the five most important issues being discussed in physics today about how it all might end: The Big Crunch, Heat Death, the Big Rip, Vacuum Decay and Bounce. She also explains the Big Bang in detail. She takes us by the hand and leads us gently but firmly through the intricacies of a complex science. And also with a wonderful sense of humour.

Yes, The End of Everything, Astrophysically Speaking, a well-researched, scientific, academic book but written with the lay person in mind, is worth a read. Katie Mack is witty and clear in her explanations.

Email ThisBlogThis!Share to TwitterShare to FacebookShare to Pinterest
Labels: academic, Katie Mack, non-fiction, science, The End of Everything

What We're Scared of by Keren David

This month I’m recommending Keren David’s What We’re Scared Of.

I’d also like to flag up here The Hive who recommended the book to me. This is a lovely on-line book shop that supports independent bookshops. Their site is clean and uncluttered, they deliver our print on demand books quickly and sell them at the RRP which Amazon is not doing at the moment.

What We’re Scared Of starts off with many of the marks of the chicklet-lit book. However, it becomes more serious as non-identical twins Evie and Lottie confront their Jewishness.

Evie is a feisty stand-up comic and goes to the local comprehensive school.  Lottie is tall and thin.  She possibly has an eating disorder though this is understated. She also suffers from asthma. She attends a fee-paying school. As Evie gets to know the son of their mother’s friend and as Lottie gets to know school friend Hannah better the girls begin to realise that their being Jewish is significant.  After their mother protests openly on her radio show about antisemitism both girls are exposed to danger.  Will life ever be the same again? Will they be able to live with their Jewishness?

What we’re Scared Of   will really get you gunning for Evie and Lottie. Keren David has created an engaging and enticing read here.

Get your copy via The Hive here  or Amazon here.

I put on this site books that take me out of my editor’s head. I am a writer, an editor and I teach creative writing in higher education so it is very rare for me to read without a little voice in my head constantly analysing what I’m reading. This even happens when I am enjoying a book and is actually a comfort when I’m not but am obliged to carry on reading.

Every now and then, though, a text will really shut that voice up.

Just because your book is not on this site does not mean it is a bad book. It means either I haven’t read it or it didn’t quite take me out of my head.

I tend to stumble across the books that go on this site. Send me review copies if you like but I cannot guarantee to put a review up here. Nor can I guarantee to read your book in the next two days. I will however put an honest review on Amazon. My reviews are never cruel.

As there are now fewer and fewer books that manage to take me out of my editor's head I'm also including the best book I've read each month.